“Get Down Tonight” is a song released in 1975 on the self-titled album by the disco group KC and the Sunshine Band. The song became widely successful, becoming the first of their five No. 1 hits on the Billboard Hot 100. It also reached the top of the Hot Soul Singles chart and was an international chart hit, reaching No. 1 in Canada and charting in Australia (No. 44), Belgium (No. 11), the Netherlands (No. 5), and the UK (No. 21). 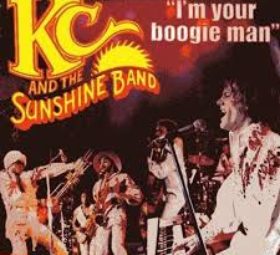 KC and the Sunshine BandI’m Your Boogie Man