“Back in Time” is a song by Huey Lewis and the News written for and featured in the 1985 film Back to the Future. The song is heard near the end of the film when Marty McFly wakes up to the song playing on the radio while in his own bed after returning from 1955. It is also played during the closing credits. As opposed to their number-one hit from the movie, “The Power of Love”, the lyrics for “Back in Time” specifically refer to the story and characters of the film.

Although not released as a commercially available single, the song, mixed by Bob Clearmountain, reached number three in September 1985 on the Billboard Album Rock Tracks chart. The video for the song features bloopers and “never-before-seen” clips from the band’s other hit videos, including “I Want a New Drug”, “If This Is It”, “Heart of Rock & Roll”, and “Heart and Soul” 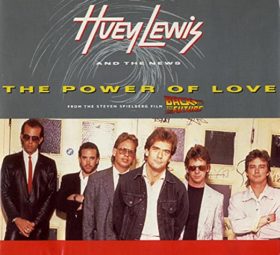 Huey Lewis and the NewsThe Power Of Love